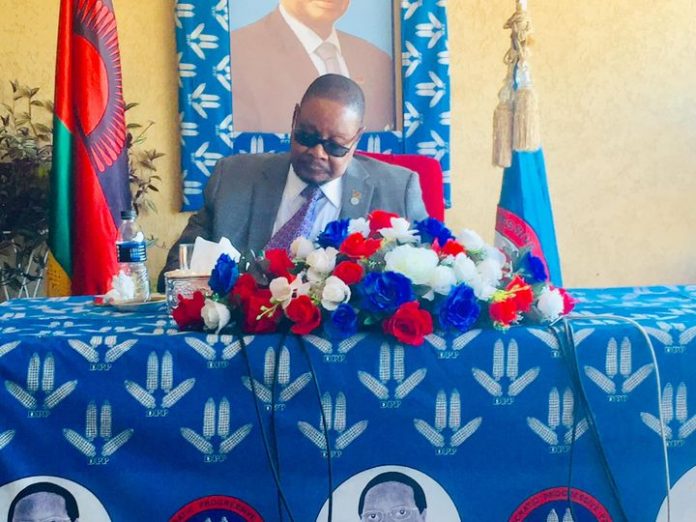 Mutharika who is also the leader of the Democratic Progressive Party (DPP) made the remarks during a press briefing at his residence in Mangochi district.

“Malawians now know who the real thieves are, infact Chakwera called me the Prince of thieves, but i now call him the King of thieves. Just before we left office, the DPP Government left K6.2 billion disbursed from Reserve Bank for addressing various COVID-19 challenges, including paying Social Cash Transfer to empower vendors and urban small scale businesses who would be affected by the pandemic and its regulation. Instead, they are arresting and persecuting civil servants to divert attention from the real thieves and culprits who gave the instructions and shared the money,” he said.

According to Mutharika, the current Government disbursed K17 billion which has also been stolen by the same people who are refusing to tell Malawians where the K17 billion has gone.

“We have an existing Office of the Auditor General whose officers are being paid to do their job every month: what does Government mean when they say they have no money to audit the K17 billion? The Tonse Government accused the DPP of theft. But up to this day, the Government cannot quote any amount of money which the DPP Government and its officials stole from Treasury,”

“In less than one year however, everyone knows that Dr Lazarus Chakwera, the MCP and their Tonse Government have stolen K23 billion that was intended to save Malawian lives from the COVID-19 pandemic. This K23 billion does not include other corrupt transactions and systematic plunder outside the COVID funds. Malawians now know who the real thieves are in this country,” he said.

Mutharika blasted the Tonse Alliance Government for failing Malawians in its first year of office.

“The DPP continues to remind Malawians that the MCP Government which is oppressing and persecuting Malawians, collapsing the economy, causing suffering, failing to develop this country and displaying lack of leadership and policy direction is a government that robed power and came into office with the help of the courts. As such, we continue to fight for justice to stop the oppression of Malawians and also rescue Malawi from destruction,”

“We are concerned that the economy is hurting Malawians and people are failing to afford basic living. Every Malawian can see that in one year the economy has drastically worsened with a critical shortage of forex, plummeting revenue, over-expenditure, excessive local borrowing and a falling Malawi Kwacha. As a result, prices are rising out of control and every Malawian is suffering more than ever. The DPP kept the Kwacha and prices of commodities stable for the six we were in government and we are wondering why the MCP Government is failing to do the same,” he said.

Mutharika was booted out of power in June, 2021 after losing fresh presidential polls that was ordered by court following nullification of 2019 presidential elections over massive irregularities.