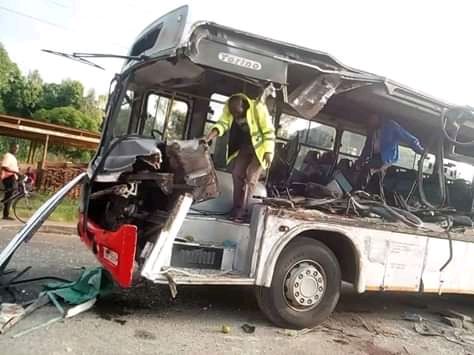 Seven passengers, including a three year old child, have sustained injuries when a bus they were traveling in hit a stationary vehicle in Zomba.

According to Eastern Region Police Publicist Joseph Sauka, no death has been recorded.

The driver for the bus has been identified as Lingstone Paul Mahiya, 65, from Binali village, Traditional Authority Mkanda in Mulanje.

“The bus was coming from Mzuzu heading Blantyre with passengers on board. On arrival at Fikani Rest House, Matawale area, (Zomba City) he hit a stationary vehicle, Freightliner horse/trailer registration number CP 3754/ ZA 8087 which was parked due to breakdown.

“Following the impact, seven passengers including the conductor of the bus and a 3 year old child, sustained various degrees of injuries and were rushed to Zomba Central Hospital, ” says Sauka.