What is really going on in Iraq and how the sudden rise of the ISIS or ISIL?

Let’s start with a proviso: these observations are written on the assumption that what we are told about developments in Iraq and Syria are at least partially true. This is not always a safe assumption to make. Britain, that self-styled peaceful post-imperial nation is at war and has been on numerous battle fields uninterrupted since the First World War she now celebrates (and upon which occasion her prime minister now wants Muslims to sell poppies for Remembrance Day), and being an experienced belligerent her propaganda machine is well oiled. Her former colony in the Americas is cut of the same cloth. Both nations are also experts at undercover and clandestine activities to further their ends. We remember some lies, such as Saddam Hussein’s weapons of mass destruction or the Kuwaiti incubators, but most lies we are dished up as news go undetected.

So here we are presented with another Islamic bogie man: the Islamic State of Iraq and the Levant (as-Sham), variably abbreviated as ISIL and ISIS. Leaving aside such confusion about its short name as a minor trademark problem whilst developing this new brand, here are its key selling points [with brief comments in brackets]: it started as a break-away faction from al-Qaida since al-Qaida has lost the pure Islamic way and got corrupted [in other words, Muslims all over the world have since realised that al-Qaida was a set-up to justify military intervention]; it is a militant Sunni group which loves killing Shia even more than it loves killing infidels [in other words, it is yet again a means of dividing rather than uniting Muslims]; it disrespects traditional borders and wants to create an Islamic state spanning multiple Muslim countries, starting with Iraq and Syria [and incidentally those borders drawn up by the West after the First World War no longer serve its purpose any more either whilst opening the border between Iraq and Syria allows the United States to bring in additional support from its bases in Iraq into Syria where its war with Russia hasn’t been going all too well]; it has a self-declared caliph who demands unconditional support from all Muslims [and has never been elected or appointed by them but rose to fame out of ignominy after having been incarcerated in a US prison in Iraq]; it represents the uncompromising face of Islam which harshly squashes any opposition [and continues to present Muslims as barbaric and the Shariah, a complex legal system of statute and case laws, as limited arsenal of gruesome punishments].

Now there are a couple of ways to cut through the fog and get to the truth in most matters. Firstly, actions speak louder than words, or as Jesus said: by their fruits you shall know them. Secondly, go with where the money is, or the old Latin adage Qui Bono – who benefits? Looked at from those angles, most ideologically justified wars we are asked to support with our ever increasing taxes and concurrent cuts in services are strangely related to economic interests, more often than not oil, be it in Iraq, Afghanistan or even Sudan. They also frequently serve perceived strategic interest, first and foremost the protection of that so-called only democracy in the Middle East, Israel, that outlying member state or colony of Europe [did you ever wonder why a country in Asia takes part in the European song contests and is handled at by the European desk of travel agents?]. Here is the picture of an Israeli coin showing a map of “Greater Israel”, encompassing the Lebanon, Iraq, Syria, Kuwait and parts of Saudi-Arabia. 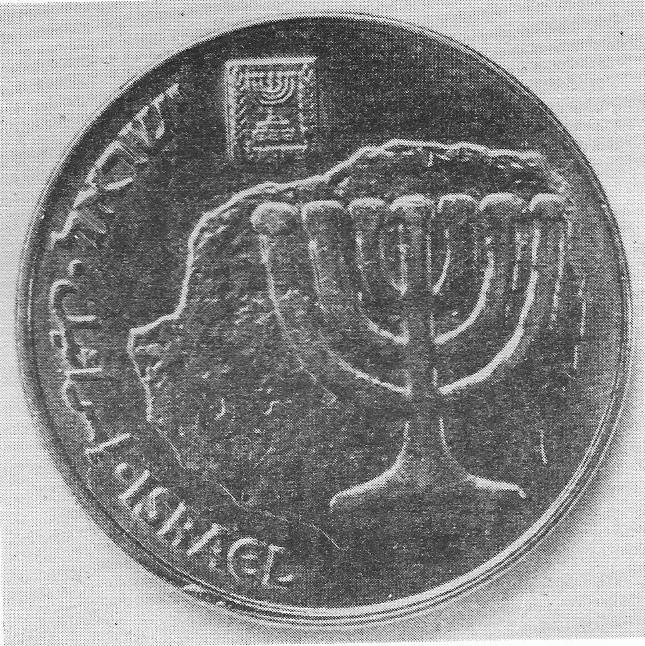 It illustrates why removing traditional borders is maybe not quite the threat to the New World Order it is supposed to be. And seeing that America the Great is so powerless in the face of this massive advance of Muslim jihadists, maybe our well armed friend and ally Israel can be asked or enticed to stem the tide for us?

But let’s not jump the gun quite yet. Let’s look at the new Muslim caliphate from an Islamic perspective. Of course, ever since the old Ottoman Turkish caliphate was destroyed by the plotting of First World War victors, Muslims have yearned for a common state, for re-establishing unity, for having Islamic principles represented rather than national interests [which in turn were more often than not sold and surrendered to outsiders]. Is this newly declared Islamic state the new Medinah for Muslims to which every individual should make Hijra (migrate) similar to the Jewish migration to their promised land under the right of return? Naturally, Muslims in other parts of the world remain cautious since he who lives by the sword will die by the sword, and with this new caliphate having emerged out of factional warfare, the dangers are tangible. But it is not just out of cowardice that the Muslim masses aren’t flocking to pledge their allegiance to the new caliph of Baghdad, once the seat of an Islamic caliphate under the Abbasides prior to the Ottomans.

Surah an-Nisa’ (the Women) of the Qur’an lays out some of the key guiding principles for warfare as sanctioned by Islam. Incidentally it also set down inheritance and other rights of women one and a half millennia ago at a time the women of the British Isles could not dare dream of emancipation or even civilisation. One of the reasons why Western media seem obsessed with only acknowledging Muslim women when they are either allegedly being oppressed or stoned to death for adultery is that to provide information about the real status and dignity Islam affords them would inevitably embarrass them greatly: women’s liberation in the West is a myth – yes, they are now allowed, or rather compelled, to work like men, but they also continue to be exploited by an industry selling its products through undressing them for potential buyers and forcing them to live up to an unnatural and unhealthy image of what their advertising agencies perceive as model beauty. Whilst Britain contemplates to emulate French laws forbidding Muslim women to cover up, she neglects her own. When England (inevitably) loses in football, there is a concomitant rise of domestic violence against women by a third. Incidentally, Surah an-Nisa’ also talks about orphans and institutes, one and a half thousand years ago, child protection rights, whereas here we are only starting to find out how much child abuse has gone unnoticed and unreported in recent decades.

But since this post will become far too long if we were to start comparing the Islamic and the “democratic” way of life in more depth, let’s keep to matters of belligerence. Verse 75 of Surah an-Nisa’ provides us with the justification for “jihad”, stating:

And what is the matter with you that you do not fight in the way of Allah and for the weak amongst the men and women and children who say: our Lord, take us out from this town of wrongdoing people and assign us a protector from You and assign us a helper from You?

The justification for applying military force in Islam is to protect the weak amongst men, women and children suffering from oppression. It is for this reason that in the early days of Islam the conquering Muslim armies were welcomed as liberators. It is the same justification, Western governments want to now appropriate for themselves when they try to justify military intervention in the name of freedom and democracy.

Against this reality, the new caliph’s ISIS perform miserably. Their actions increase fear and terror amongst innocent men, women and children and make them flee from their advance. Furthermore, warfare in Islam does not only have to be justified in its objectives, it also must follow clearly pronounced moral principles. For example (verse 92-93):

And it is not permitted for a believer to kill a believer except by mistake. … And whoever kills a believer deliberately, his reward is hell where he remains forever, and Allah is angry with him and curses him and has prepared for him tremendous punishment.

Of course, the British-sponsored Wahhabi and American-sponsored Al-Qaida movements got round this prohibition by the instrument of “Takfir”, declaring that somebody not sharing their own interpretation of Islam is not really a proper believer and may therefore be killed. As if in anticipation of this diversion, the next verse of the Surah, verse 94, provides a direct answer to such connivance:

Oh you believers, when you  go out in the way of Allah then make sure and do not say to anyone who offers you peace ‘You are not a believer’, desiring the offering of this world when with Allah there is plenty of gain; you yourselves were like this before, then Allah bestowed His favours on you, so make sure, for Allah is aware of what you do.

Again, this is not the place to write a detailed study “On War and Peace” as ordained by Islam. But based on this cursory inspection of Qur’anic injunctions and not even having touched the wealth of advice given by the prophet of Islam on the matter, the new group allegedly spearheading the Islamic revival has failed the test. By your fruits you shall know them. Now back to “Qui Bono”. Who benefits when Islam is given a bad name? Who benefits when Muslims are driven out of their homes and add to the sea of refugees already consisting of 70% Muslims? Who benefits when there is suddenly a renewed interest to support the failing interventions of the USA and Britain in Iraq and Syria? Who benefits when the countries surrounding Israel get further destabilised? Who benefits when Western security agencies are given more powers due to renewed security concerns, forgotten that only very recently they were found out to having been spying on their own people? Who benefits from a permanent state of war?

The jury is out but it shouldn’t take all too long to reach a verdict. Provided, as I said at the outset, evidence and information we have so far is reliable.