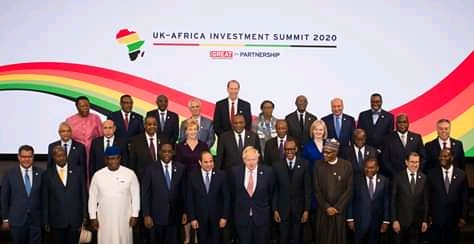 The United Kingdom (UK) has committed to continue supporting Africa to see continued socio-economic growth of the continent.

This is according to a statement issued by British Government today after the inauguration of the UK- Africa Investment Summit by UK Prime Minister Boris Johnson in London.

“The UK is strengthening its economic partnerships with African nations, as part of a Government drive to ensure the continent’s growing demand for investment is met by the UK’s expertise and innovation,” reads a statement.

UK says british companies have already signed commercial deals that will benefit both UK and Africa.

“In the lead up to the UK-Africa Investment Summit, which is being held in London today (20 January 2020), £6.5 billion of commercial deals have already been signed by British companies to deliver jobs, growth and investment across the UK and Africa, with deals worth billions more expected to be made during the course of the day,”

“They are expected to mobilise billions of pounds in private sector investment for Africa, marking a new era of trade between the UK and Africa,” reads a statement.

According to a statement, Africa has 8 of the world’s 15 fastest growing economies and there is huge demand on the continent for clean, sustainable and innovative investment.

“As home to some of the world’s most enterprising technologies and the financial centre of the world in the City of London, the UK is perfectly placed to meet that demand and be the continent’s investment partner of choice,” reads a statement.

21 Presidents from Africa including President Peter Mutharika are attending the UK-Africa Investment Summit.