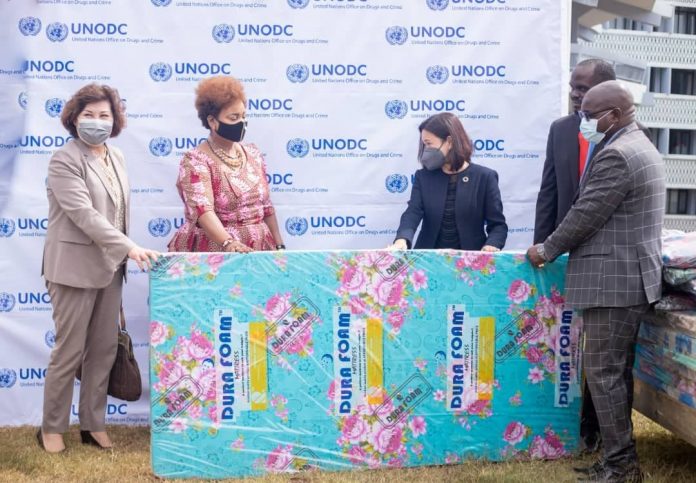 United Nations Office on Drugs and Crime (UNODC) on Thursday 17 June 2021, handed over 120 sets of beds, 120 Mattress and 120 blankets for the shelters that will be providing accommodation to victims of human trafficking identified among the refugees, vulnerable migrants, and asylum seekers. UNDOC made the donation to the Ministry of Gender Patricia Kaliati.

UNODC through the Southern Africa Regional Office is supporting Government of Malawi to strengthen its capacity for addressing trafficking in persons facing refugees through initiative made possible with funding received from the Kingdom of Sweden.

Speaking after the donation UNODC Operations Director Miwa Kato said, UNODC understand that Malawi is at the crossroads of significant movements of populations fleeing conflict, persecution and instability in Central Africa and the Horn of Africa.

She said UNODC decided to make the donation after looking at shealter challenges being faced by the victims of trafficking.

“Refugee flows continue to cross the borders of Malawi, aiming at finding security in the country or pursuing their journey to wealthier States of the region. UNODC has been informed that Refugee populations in Malawi, are exposed to great risks of abuse and exploitation as organized criminal groups operating at border areas, in or around the Dzaleka refugee camp are making profit from the vulnerability and desperation of refugees, who often do not have any other alternative than to submit to exploitation to survive”, said Kato.

Speaking after receiving the donation Minister of Gender, Social Welfare and Rural Development Hon. Patricia Kaliati said the support has come in time and the items donated will fill the gap that was there in the victim shealters.

Among other technical assistance UNODC is working with Malawi Government to establish its domestic legal and policy framework on trafficking in persons, as well as providing training to key sectors, including judicial officers and criminal justice practitioners to identify, investigate, prosecute, and adjudicate all those involved in human trafficking.

Recently, UNODC also supported the Ministry of Homeland Security with the development and adoption of a Protocol for the identification and referral of victims and potential victims of trafficking at the Dzaleka refugees.

The United Nations Office on Drugs and Crime (UNODC) is the department of the UN Secretariat mandated to assist the Member States in the implementation of the UN Convention on Transnational Organized Crime and its Protocol on Trafficking in Persons. More particularly, UNODC has the mandate to assist Member States in enhancing their national responses as well as to foster international cooperation to counter TIP, in line with international instruments and standards.