Legal practitioner, George Jivason Kadzipatike of Jivason and company, representing Mr. Nicely Msowoya, Youth And Society( YAS), Church and Society of the CCAP (Livingstonia synod) and Human Rights Defenders Coalition (HRDC) have given state owned Malawi Broadcasting Cooperation (MBC) up to Friday, 15th May,2020 demanding it to suspend its broadcasting services to the nation.

Jivason and Company says the suspension will serve until such a time that the unprofessional members of staff including its secretariat and Board, are replaced by competent and professional individuals.

The legal practitioner has since warned MBC TV and Radio that if they are not taken off- air by Friday, they shall immediately file an order in the High Court compelling MACRA to close MBC until the unprofessional personnel threat are flushed out and duly replaced.
MBC management has since apologized for the broadcast saying it was an over- sight on the part of the editorial team.

The MBC television used swearwords in its 7 pm Chichewa news bulletin of Monday, 11th May, 2020, in the report that was narrated by journalist Henry Haukeya, used a screenshot of Facebook comments with obscene and embarrassing words castigating State Vice President, Dr Saulosi Klaus Chilima, who is also UTM leader.

In its statement signed by its chairperson, Prof. Wiseman Chijere Chirwa and Moses Kaufa( Executive Director), the MCM says the apology being aired by MBC TV and Radio leaves a lot to be desired as it deliberately leaves out other sections that have been directly affected such as Dr Chilima,his family and the media.

On its part, MISA Malawi in a statement signed by its chairperson, Teresa Temweka Ndanga, asked MACRA to discipline MBC and ensure the station’s professionalism operates according to the provision of the Communications Act.

MISA Malawi is also asking Parliament to take concrete steps that would guarantee non-partisan programming at MBC all times. 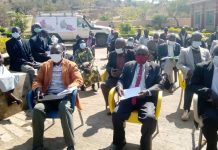