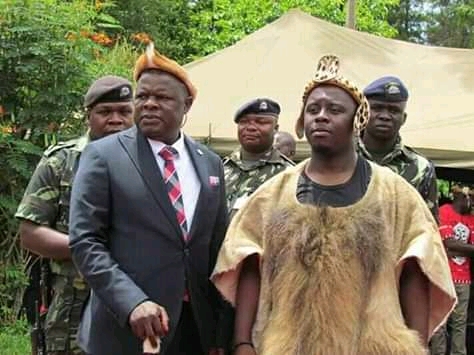 Paramount Chief Gomani V has called for continued unity and love among all Maseko Ngonis for sustainable development.

Paramount Chief Gomani who is also popularly known as Inkosi Gomani V made the remarks on Sunday during the 2020 Umbizo Cultural Ceremony at Nkosini Headquarters in Lizulu Ntcheu district that was attended by the Vice President Everton Chimulirenji.

Gomani observed that about 64 percent of Malawians are youthful and has since encouraged them to be culturally active. He further urged girls to go to school.

According to John Mataya who is Gomani family representative to the Gomanis, Umbizo cultural ceremony is a local census for the Maseko Ngonis where the Ngonis meet and thank God for giving them healthy lives in the past year.

In his remarks the Vice President Chimulirenji who is also Impi (advisor) to paramount Gomani concurred with the Paramount Chief on the need for continued unity and love.

He cited an example of the Umhlangano annual ceremony where two doves are brought together saying that symbolizes peace and love.

“As an Impi, I will give paramount chief all the support in all cultural and developmental issues,” said Chimulirenji.

The 2020 Umbizo is the third of the ceremonies that have since been organized by Paramount Chief Gomani V.