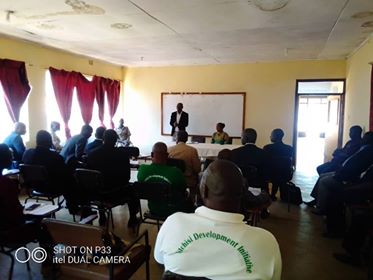 This was disclosed in a meeting that was held at Ntchisi Community Development hall on Wednesday May 13, 2020.

Kaponda says the disputes led to the closure of Chinthembwe Health Centre due to the threats some health workers at the facility were receiving.

In his remarks Ntchisi Acting District Commissioner, Dr. Zondwayo Ng’oma who is also director of health and social services for Ntchisi District Hospital said, as a district they can not unilaterally solve land wrangles without invoving security agencies.

“Issues of threats that health workers and church members were receiving at Chinthembwe Mission can not just go free without involvement of the police to take note”, said Dr Ng’oma.

In his speech vice moderator for Nkhoma Synod Reverend Philip J Kambulire said communities of Chinthembwe encroached the area of the mission.

“The two villages encroached the area for Nkhoma Synod and started cutting down trees posing a threat to people at the mission”, the moderator said.

Traditional Authority Vusojere apologized to Nkhoma Synod members for the conduct of the villagers and begged them to reopen the health centre.

“Communities at Chinthembwe are now having problems to access health care services due to the closure of the health facility I therefore apologize for the conduct of my subordinates and ask the authorities to reopen the facility”, the local reader said.

On his part station officer for Ntchisi police station senior superintendent Billy Chimbonga thanked all stake holders for involving the police on the discussions.