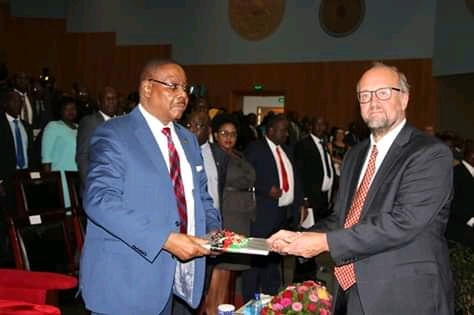 President, Arthur Peter Mutharika has described the Agricultural Commercialisation (AGCOM) Project as a tool that will transform Malawi’s economy and enable the country transform into a producing and exporting nation.

Mutharika was speaking on Friday when he presided over the official launch of AGCOM Project at Bingu International Convention Centre (BICC) in Lilongwe.

He said the Agriculture Commercialisation Project, which is being supported with a credit from the World Bank, will revolutionise agriculture in the country.

“I am pleased to launch this project today. Malawi is now moving beyond subsistence agriculture into commercial farming.

“This project (AGCOM) will transform agriculture in Malawi and empower our farmers to make more money and create more jobs,” said the Malawi Leader.

The Head of State said that the project will empower communities economically is a major step in the development of the country.
He said through the project, Malawi will be able to focus more on development from the grassroots.

“Developing agriculture is the right starting point for developing Malawi. I want development to start from the rural communities and feed our towns and cities.

“With this project, we will be taking development to the people, not people to development,” Mutharika added.

The first citizen further explained that the economic potential of the AGCOM Project is also crucial to his government’s vision of making rural communities centres of development in the country.

He cited the project launched as one of the many others that his government has lined up.

“This is what we will be doing for the next five years. I want every community to be food secure, have access to electricity, potable water supply and good road network.

“I also want every community to have a secondary school, technical college and a hospital,” Mutharika said.

“This project will be part of Malawi’s success story in the near future and we are glad to support Malawi Government. Through the project, small farmers will become more economically resilient and will contribute to creating jobs as has been the case in other countries that are implementing similar projects,” said Toulmin.

The World Bank official also commended progress that Government of Malawi has made in creating a conducive environment for business and investment.

In his address, Minister of Agriculture, Irrigation and Water Development, Kondwani Nankhumwa also hailed the project as crucial in transforming agriculture and accelerating the country’s development.

“This is a very important project in the development of the country. We have, for a long time, dwelled much on subsistence farming.

“Now, we want to go commercial and empower our farmers to make more profits from their farming,” he said.

Agricultural Commercialisation is a six-year project to be implemented with a credit from World Bank to the tune of 95 million US Dollars (nearly MK70 billion).

The project is being implemented by three government Ministries of Agriculture, Irrigation and Water Development; Industry, Trade and Tourism and that of Lands, Housing and Urban Development.

The project aims at empowering farmers with good financing for investing in agriculture, access to well-structured markets, good feeder road networks for easy transportation of produce and organising farmers into associations to maximise production.

Malawi has been a predominantly importing and consuming country. The project is expected to help the country fulfill its vision of transforming into a predominantly producing and exporting nation.