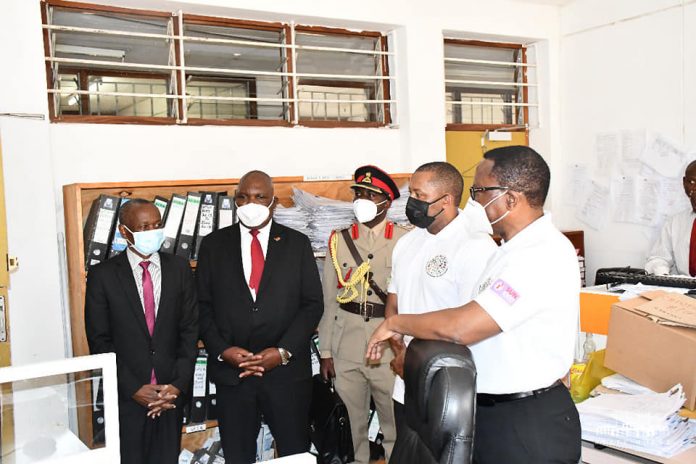 President Dr. Lazarus McCarthy Chakwera and his Vice, Dr. Saulosi Klaus Chilima on Thursday stormed Capital Hill by surprise to demand answers from officials on the delays to remit salaries to public servants who until today, many are not paid.

Dr. Chakwera expressed his great dissatisfaction with the delay shown by the Department of Human Resources Management and Development (DHRDM) demanding no excuses but to account for reasons that are making delays to the payment of public servants on time.

The visit by President Dr. Chakwera and his Vice, Dr. Chilima to the Capital Hill offices, coincided with the letter written by Leader of Opposition in Parliament, Kondwani Nankhumwa MP to President Dr. Chakwera dated 1st September 2021 raising his concerns that besides public servants not paid by this day, MPs have also not received their August salaries and allowances on time dating back to the Budget Session meeting of May 2021.

Nankhumwa said various parliamentary committees are meeting and members have not been receiving allowances for fuel and others saying they were informed that these delays are caused by some technical challenges facing the government paying system, the Integrated Financial Management Information System (IFMIS).

“Whether or not, this is true, what civil servants want is to be receiving their salaries on time,”reads part of the letter to President Dr. Chakwera from Nankhumwa.

He reminded President Dr. Chakwera that these civil servants, their families, and dependents woke up very early in June 2020 to cast their vote which culminated in his ascension to power, saying it is important that when the same people are suffering today, he must always listen to and side with them.

Nankhumwa said Malawians are already suffering due to the prevailing unfriendly economic environment where prices of basic commodities have risen sharply including rentals and transport costs saying it is catastrophic for a civil servant who is already under-paid, to be receiving salary late.

He said it is the legal obligation of President Dr. Chakwera’s government to pay civil servants’ salaries on time requesting him to reconcile this worrying situation as a matter of urgency and find a long-lasting term solution to it.