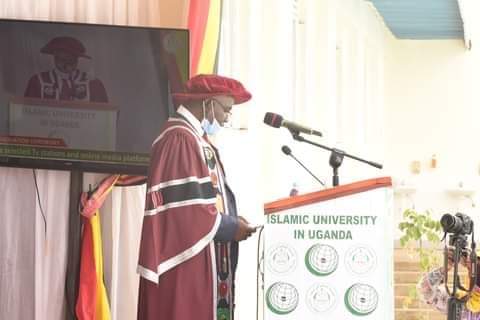 The outgoing Rector of the Islamic University in Uganda (IUIU) that has over 30 Malawian students (Christians and Muslims) , now the Assistant Secretary for Economic Affairs in Organization of Islamic Cooperation (OIC),Dr Ahmad Kawesa Sengendo has handed over the powers to the new Rector of the Institution, Professor Ismail Simbwa Gyagenda during an auspicious occasion held yesterday at IUIU Main Campus in Mbale city after 33 years of service.

After sharing corridors at Makerere University in late 1970s, the two great academicians had a great time at Islamic University where Professor Gyagenda was serving as Vice Rector for Academic Affairs before appointed to the institution’s top office by the University Council during a meeting held at Hotel Africana in Kampala last week.

The two have had a mutual working relationship dating back from Makerere University where Professor Gyagenda handed over the Chairmanship of Makerere University Muslim Students Association (MUMSA) to Dr Sengendo in early 1980s and according to Dr Sengendo, he improved the status quo of the association than how it was during Professor Gyagenda’s tenure in office from 1980 to 1982.

The mutual working relationship of the two need no statistical tabulations for it to be proven productive because when they were in their respective offices alongside the Vice Rector for Finance and Administration Professor Abdul Kaziba Mpaata and not forgetting the academic and non-academic staff of the Islamic University in Uganda, the institution has managed to win a number of academic awards in Uganda, East Africa and Africa. The tremendous achievements of the Islamic University could have hit snag without enthusiasm, determination and focus of the gallant students of the institution.

In his maiden speech during the function, the new IUIU Rector Professor Gyagenda said it is impossible to survive in the ocean of tremendous success fulfilled by Dr Sengendo starting when he was just 29 years old to date at the Islamic institution.

“Dr Sengendo Ahmad, I was your boss back at MUMSA; you have been my boss here at IUIU. You keep following me or it is the other way round!! Of course, as I said on Tuesday, after your missionary and dedicated service at IUIU for 33 years, only a fool would trying filling your shoes. And I think I am not a fool! So instead, I will try to make my own footprint, assisted by Team A of Professor Abdul Kaziba Mpaata, Vice Rector, Finance and Administration; Dr Jamir Serwanga, our new Vice Rector, Academic Affairs,” Professor Gyagenda said.

It is everyone’s hope including the new OIC Assistant General for Economic Affairs that Professor Gyagenda will perform.

Professor Gyagenda is a well-known academician in Uganda and across the world. He attended Kabwohe Muslim Primary School , Mbarara High School for his O Levels, and St Mary’s Kisubi for his A levels.

Professor Gyagenda graduated from Makerere University in 1979 with a First Class Bachelor of Arts Honors (Literature and Religious Studies) , and a concurrent Diploma in Education.

In 1987, Professor Gyagenda graduated from Yarmouk University, Jordan with Master with Education in Teaching English as a foreign language. In the same year, Professor Gyagenda was part of the pioneer staff who started IUIU in Mbale where he was one of the male wardens and lecturer.

From 1988-2016, Professor Gyagenda was in the United States of America where he obtained an Master of Arts in Educational Administration and Supervision from the University of District of Columbia, Washington DC, in 1989. In 1999, the new IUIU Rector for the next five years obtained his PhD in Educational Studies from Emory University, Atlanta, Georgia.

Professor Gyagenda then joined and taught in the Graduate Teacher Program, Mercer University, Atlanta Campus from 2001 until 2016, when he came back to IUIU as Vice Rector for Academic Affairs.

Professor Gyagenda’s research interests include culture and schooling, philosophy and integration of knowledge, Muslim institute of higher education, and contemporary issues in education.