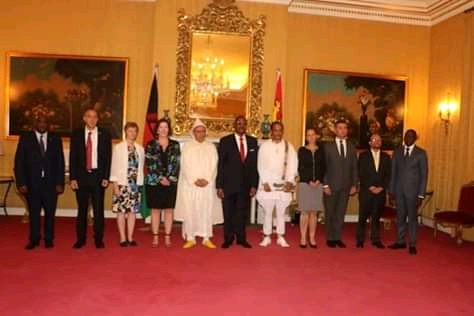 Eight envoys from various countries on Thursday presented their letters of credence to president Peter Mutharika at New State House in Lilongwe with pledges to foster bilateral corporation in areas of agriculture, health and education among others for the benefit all people in these countries.

The new High Commissioner of Canada to Malawi, Mary Delany said her Country was interested in furthering Canadian support in the areas of agriculture, health and education among others.

She further said her country was also involved in the promotion of clean energy in the country such as solar energy.

The new Finish ambassador to Malawi, Suomela Chowdury said she was looking forward to enhancing what she described as excellent relations between Malawi and Finland with the aim of improving the welfare of citizens in the two countries.

“Malawi and Finland have excellent bilateral relations. There are several civil society organizations in Finland that are working with their Malawian counterparts in promoting the welfare of people in the two countries in the areas of health and education, in particular the promotion of girl child education.

“There are also Finish corporations that are interested in investing in the power sector among others,” she said.

On his part the new Ethiopian Ambassador to Malawi, Meles Tekea hailed the cordial relations Malawi has had with Ethiopia since 1964 and said he was looking forward to sustaining the warm relations the countries share for the benefit of the people of both countries.

“As you know Malawi shares deep bilateral relations with Ethiopia. For example, the current Malawi’s president, His Excellency Peter Mutharika taught at the University of Adis Ababa’s Faculty of Law some time back.

He said his country was also interested in promoting tourism. He cited the Ethiopian calendar as an example of rich tourist attractions in Ethiopia.

“This is 2012 according to the Ethiopian calendar and it is one of the rich tourist attractions that Ethiopia would like to promote,” he added.

For the first time, Georgia also has an ambassador to Malawi, BekaDvali, who said his country is interested in trade and investment.

Minister of Foreign Affairs Francis Kasaila told the media after the envoys presented their letters of credence that the event was important to the country.

“As you know most of the countries whose representatives have presented their letters of credence are developed countries and have resources for trade and investment, for example, which could create jobs for many youths who are unemployed in the country,” he said.