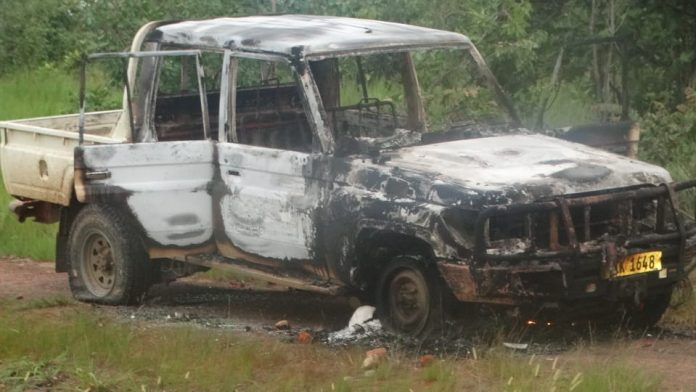 An angry mob in Nkhotakota has set ablaze two vehicles belonging to African Parks manning Nkhotakota Game Reserve after an elephant suspected to have bolted from the game reserve killed a woman in the district.

The incident occurred on Friday 28, at Bamba village in the area of Sub Traditional Authority Nkhanga in the district.

Nkhotakota police station public relations officer Williams Kaponda said on the day, the deceased with her husband went to their farm which is metres away from Nkhotakota Game Reserve.

“In course of farming an elephant approached which frightened the two and they separately ran away,”

“Unfortunately, an elephant got hold of a woman and killed her on spot. Following the incident, Nkhotakota Game Reserve officials and police were informed and rushed to the place,” Kaponda said.

However, the police and Nkhotakota Game Reserve officials reached the place were unceremoniously greeted by angry villagers who started beating officers.

“This was after blocking the road with trees making it impassable. Two motor vehicles belonging to African Parks were burnt while two officers David Robertson field operation officer and a game ranger Thomson Mizeck were seriously injured in the fracas,”

The deceased Sabitha Banda, 21, hailed from Nambamba village in the area of Traditional Authority Chakhadza in Dowa district.