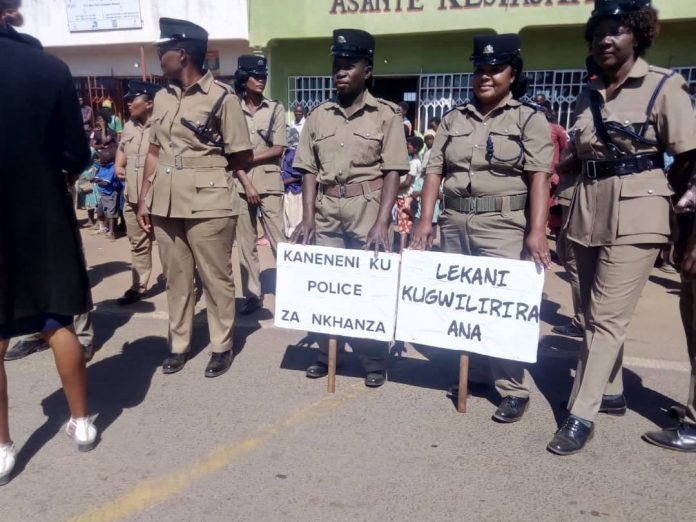 Mponela police station public relations officer Kaitano Lubrino says the parade which matched from SMEDI offices to Mponela Police Ground marked the beginning of this year’s activities which among others the female cops will lead into some key assignments in detection, apprehension and prosecution of offenders.

“Among other activities in the operation will include; sweeping around leisure centres, and expediting conclusion of outstanding GBV cases. During the period, women will lead successful multi-disciplinary roadblocks in law enforcement across Mponela policing area to ensure road safety for all road users,” Lubrino says.

“This is a great initiative from the women. I must really applaud them. It looks good to see women taking a leading role and having an entire operation by them, it shows that women are capable, “he said.

Nthenda urged communities to join hands with the police to end GBV by among other things reporting cases to responsible institutions. In her remarks, Chairperson of Mponela Police Station Women Network, Detective Sub Inspector Veronica Chimberenga said that she looks forward to the road ahead for Basadi, adding that they are confident that through this programme, they will be able to attract and retain the best female talent in the field.

Emily Banda, one of the participants who is also the Chairperson for Mponela Queens applauded the initiatives saying the program will foster a rational working relationship between police and citizenry. BASADI operation is conducted in all Southern African Development Community (SADC) member states with an aim of showcasing the potential that women police officers have in ending GBV. This year the operation starts on May 26 and will run up to 28, 2021.