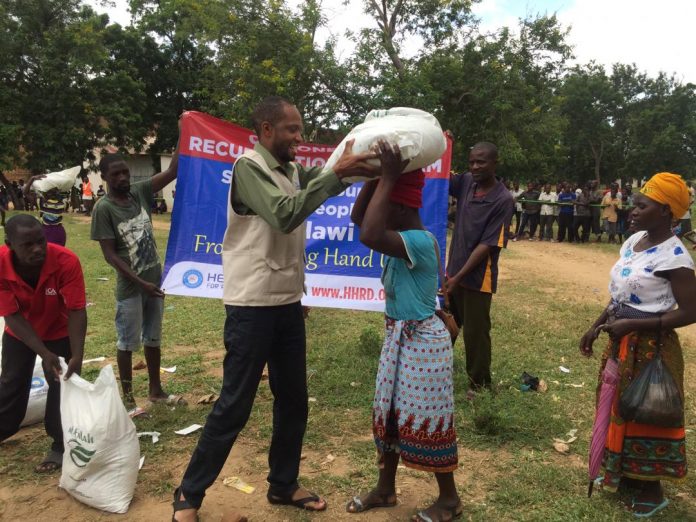 Helping Hand for Relief and Development – Africa (HHRD) through Muslim Association of Malawi (MAM) has extended its hand to  Cyclone Idai victims in Malawi.

Bangula camp is currently housing over 5,000 displaced children, women and men from both Malawi and Mozambique.

According to the charity’s Project Manager, Musa Ibrahim, the relief items are worth 30,000 United States Dollars (over 21 million Malawi Kwacha) in total.

“Malawi is close to our heart. We have seen that a lot of assistance is not coming to Malawi that is why we thought we should start here first before we proceed to other countries. But this is just a beginning – we are here for the whole week to assist our brothers and sisters who are affected with the cyclone,” he said.

In his remarks, MAM Executive Director Stot Watch said the Muslims’ mother body approched HHRD after noticing that things were getting out of hand and that more help was needed.

“After the incident, we sent our team to investigate the degree of the damage and we saw that it was very terrible. It is when we thought it was important to approach our counterparts from Kenya to help us with the relief items because people here are lacking many things. We know it not much but it will make a little difference,” said the Executive Director.

Homes, hospitals, schools and agricultural land were destroyed with bridges were washed away by floods, making multiple key roads impassable.

The victims are gathered in transit camps where they lack many things such as food, water and other sanitation services.

Although the Malawi Government and other charities have intervened, the assistance is still far from enough considering the number of people who are affected.