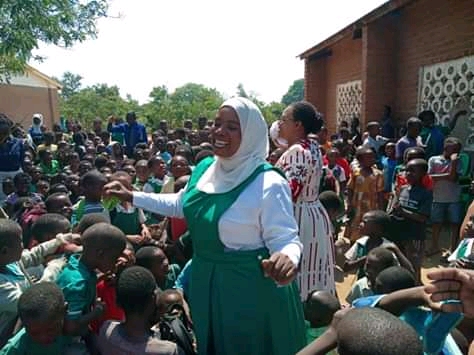 Abiti Molesi was speaking at the #EVAWG community campaign by Oxfam in Malawi that focused on promoting girls’ education in Mangochi Nkungulu, a constituency that is represented by her daughter.

“I used to make fritters (Mandasi), banana flitters and knit wool hats and give Aisha after school to sell around the village so we could pay for school fees and meet her other school needs,”

“I did this until Aisha finished her secondary education and little did I know that my daughter would someday be elected deputy speaker in parliament” she said.

Mayi Pelosi urged parents to send their children to school to allow them have a brighter future.

“I would like to encourage parents that are here to send their children especially girls to be in school and complete school because you may never know what these girls and boys will become in the future,” she said.

Aisha Mambo Adams is a model to girls, young women and women not only in her constituency but across the country.

She is a qualified teacher and a journalist and also creates time in her busy schedule and conduct role modelling and mentorship in schools in her constituency.