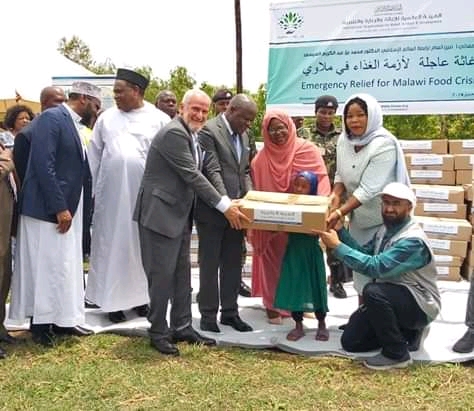 Muslim World League International Organisation for Relief, Welfare and Development on Wednesday donated 1 billion kwacha cheque to over 3000 orphans at Ngolowindo Islamic School in Salima for their education and welfare support.

“We care about children because they are the future and orphans lack alot of things so we have to support them to shape them and hopefully we will have great leaders of tomorrow,” Moosa said.

The function was presided over by the Vice President Everton Chimulirenji.

Chimulirenji commended the Islamic organisation for various projects in the country such as a magnificent theater it has constructed at Salima district hospital and a modern mosque in the same district.

“As government, we appreciate the help you have done like constructing a good theater and a male surgical ward for the eye department at Salima district hospital , we say thank you for supporting our people and government,”

The ceremony also marked the launch of the distribution exercise of relief food items to the orphans by the organisation.

The organisation has been supporting orphans in the area since 2015.