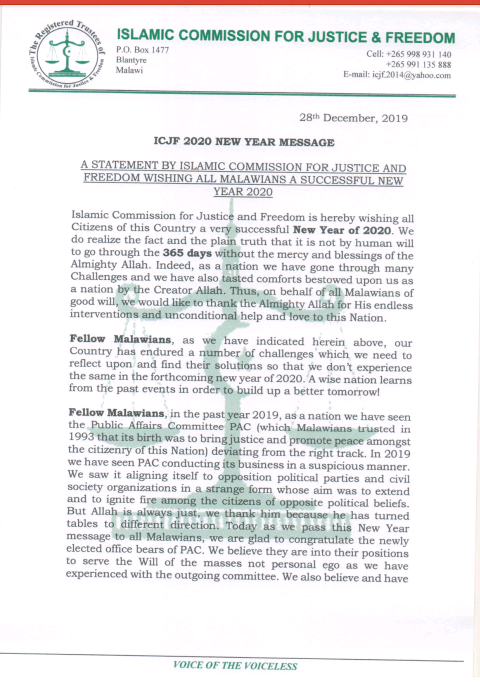 According to a statement signed by ICJF Chief Commissioner, Mr Abdul Rahman Ajassie, PAC and HRDC were allies of opposition political parties when discharging duties.

“The Public Affairs Committee (PAC) deviated from the right track. In 2019, we have seen PAC conducting its businesses in a suspicious manner. We saw PAC aligning itself with civil society organisation and opposition parties in a strange manner whose aim was to extend and ignite fire among the citizens of the opposite beliefs. But Allah is just . We thank Him because he has turned the tables to different direction,” reads a statement.

ICFJ has congratulated the newly elected PAC committee and urged them to work diligently in 2020.

The organisation also condemns HRDC for behaving as a political party and lacking transparency and accountability in the year ending tommorow.

“ICFJ also observed that some civil society organization who regard themselves as champions of Human Rights not being accountable to the masses they claim to serve. Some of these institutions were so vocal criticizing other institutions that they are not doing well. But No one of them has given even a simple financial report to the people of this country to demonstrate how transparent and accountable they are to the people,”

“It is our prayer and wish that these organisations shall not repeat in 2020 what they have done in 2019. Some of such organisations openely conducted their business in a very biased form. They fought for particular political ideology and philosophy, while claiming to be discharging their duties impartially. Malawians want to see Genuine Human Rights activists in 2020 and beyond, not political human rights activists,” reads a statement.

The Islamic organisation continues by condemning the brutal killings of people with albinism and a police officer in some parts of the country.

“ICJF therefore wishes to seriously condemn such barbaric act by some evil people who wish to destroy our nation with no tangible reason as to why they do that. Our friends and relatives of albinism have gone through lots of atrocities. They have lived like animals which are under predators gun point! This act has gravely traumatized them and made them to feel like they are alien to this country. It is a wish as ICJF to see a big change from this malpractices as we enter into 2020. Let us all as a nation say no to albino killings and abductions in 2020 and beyond,”

“We also condemn the killing of police officers in the line of duty. For example what happened at Msundwe. Let us all realize the fact that malawi is much bigger than individuals of certain part of this country. It must be emphasized that 2019 police officers killing is an evil and barbaric act which ICJF and all Malawians of good will, will not want to go into 2020 with such evil spirit. We want Malawi of 2020 to be a very peaceful Malawi free from bloody violence or whatsoever,” reads a statement.

The organisation calls upon all religious groupings to be instruments which can promote and protect peace.

“Furthermore, they should be first entity to respect Laws of the country. It is very sad to note that, we have recorded in 2019 religious violence in some parts of this country, i.e M’manga in Balaka. We condemn this act in strongest terms! We believe that both Anglicans and Muslims are all Malawians hence they should live in harmony. We also believe that both parties have in their doctrines that peaceful dialogue is the only successful way to go when there are differences in some aspects. As we move to 2020, we expect that the matter which led to bloody violence will be amicably resolved by way of fellow Malawians, as a nation we are going through challenges which we need to hold hands as a nation together and fight such challenges,”

“There are reports of starvation in some parts of this country. We therefore call upon government and people of good will to take care of those suffering with hunger, government alone can not do hence call to all stakeholders to give a hand on this very important issue. Let us all know that a hungry man is an angry man. Therefore we can create a good society when all citizens have basic needs, more importantly food on their table,” reads a statement.