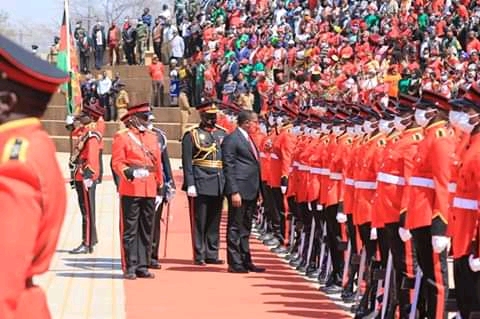 President Dr. Lazarus Chakwera says Government is committed to help Malawians prosper together saying his Administration has a Cabinet with the highest representation of women and young people in history who are ready to develop the country.

Dr. Chakwera says in the elections Malawi just had on 23rd June, 2020, Malawians showed that they are tired of the human causes of their impoverishment and tired of electing people to public offices who use public funds for personal enrichment not public service.

He says the elections had proved that Malawians are tired of the civil service overrun by the rubble of unprofessional cronies, parastatals run by incompetent boards and careless executives saying Malawi stands in the twilight hours between the receding gloom of a long dark night and the rising bloom of a new day.

According to Dr.Chakwera, Malawi is not poor but in the past some selfish individuals were lubricating poverty of the country through malpractices such as corruption, a culture that Tonse Alliance Government will not eliminate.

This is contained in a speech President Dr. Lazarus Chakwera delivered, Friday, in his State of the Nation Address (SONA ) opening of the 49th session of Parliament in Lilongwe.

In his speech, Dr. Chakwera said to advance the agenda of uniting Malawians, he has created the Ministry of Civic Education and National Unity saying through this Ministry, his Administration is working on establishing the Truth and Reconciliation Commission to complete the task left unfinished by the defunct National Compensation Tribunal.

Dr. Chakwera said within this Ministry, is also the establishment of Malawi Peace Commission supported by District Peace Committees in every district saying this bold policy is to recover together from the wounds they carry will require plenty of civic education.

He reported to Members of Parliament [MPs] that within 40 days, the draft National Civic Education Policy has been finalized and is ready to launch, meaning that the National Peace Policy will be reviewed to align the two.

The President congratulated Parliament for registering gains during the difficult period saying the passage of a resolution for the fresh presidential elections against all odds, adopting several bills, and conducting orientation programs for political leadership in the House, among others.

“I assure you that my administration’s support in the implementation of the development of the 2020 -2025 Parliament of Malawi Strategic Plan and the construction of 193 Constituency offices to serve as permanent points of access for Malawians to reach their MPs ,’’ says Dr. Chakwera.

He said it has long been his view that MPs ought to have official residencies within their constituencies to ensure that they are part of the community, they represent, saying his administration is actively engaging investors to develop plans for his project and to expedite its commencement.