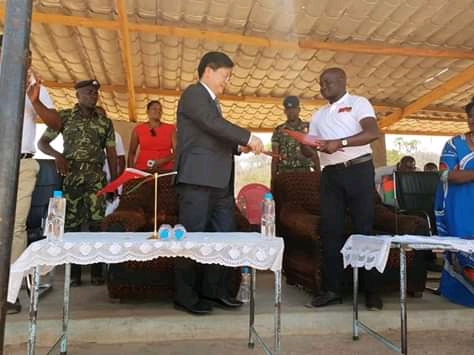 The Peoples Republic of China has handed over 500 satellite Television Villages to Malawi.

Minister of Information, Civic Education and Communications Technology, Mark Botomani, recieved the villages on behalf of the Government of Malawi.

According to Botomani, the satellite villages will help people living in rural areas to access information.

“The project has given
people living in rural areas an opportunity to have access to as much information as possible thereby making the rural communities more enlightened and progressive as they effectively participate in the country’s development and democracy,” he said.

Member of Parliament for the area and Minister of Transport and Public Works Ralph Jooma thanked President Peter Mutharika for the many projects his government is implementing in the country.

Jooma said the satellite TV project has already had impact on his constituents. He said pupils are able to get new knowledge from some education programmes that they watch.

In Malawi, 20 households in each of the 500 villages were identified from all 193 constituencies from Nsanje to Chitipa in consultation with Members of Parliament and Chiefs.

Each village that was selected received a 32’ TV screen, two projector decoders, three satellite dishes and three sets of solar panels and batteries to power the TV units.