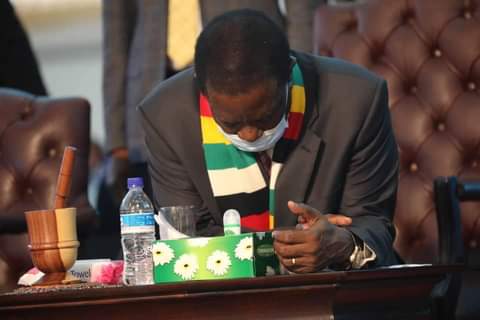 The President of Zimbabwe , Emmerson Dambuzo Mnangagwa says the departure of the incumbent United States President, Donald Trump in the Oval Office is a relief to the economy of his country as the 45th US President was imposing painful economic sanctions on the country.

Mnangagwa’s remarks are coming few hours after the formal announcement by the US Congress that Democrat, Joe Biden won the November, 2020 general elections and he is the 46th President of the United States.

“Yesterday’s events showed that the U.S. has no moral right to punish another nation under the guise of upholding democracy. These sanctions must end,” Mnangagwa wrote on his Official Facebook page.

Mnangagwa has since wished Biden a successful term in office and vows to work with the new administration to materialize bilateral relationship between United States and Zimbabwe.

“I’d like to again congratulate President-elect Joe Biden on his confirmation as the 46th President of the United States,”

“Zimbabwe is, as it always has been, ready to work together as friends and partners with the U.S for the benefit of both our peoples,” he says.

Yesterday, pro-trump supporters stormed the US Capitol when US Congress was in process of affirming Biden as the 46th President of United States.

Later in a tweet, Trump asked his supporters that despite that the elections were rigged, they must abide to the laws of the United States by not staging violent protests.

Meanwhile, Donald Trump says he will allow smooth transition of power from him to Biden on 20th January, 2021 in DC.