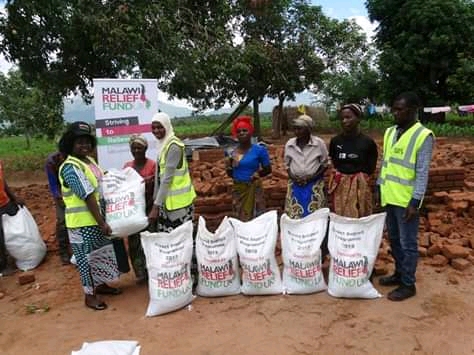 Member of Parliament for Zomba Malosa Constituency, who is also Deputy Minister of Gender, Children, Disability and Social Welfare, Grace Kwelepeta, hailed the NGO for the gesture.

Kwelepeta said MRF is a long time partner in terms of supporting vulnerable people in her constituency.

She said was pleased to receive positive response that Malawi Relief Fund would support 1, 000 families with assorted items.

“I was very grateful to be informed that the NGO has responded positively to my request to support people whose house roofs were blown off by strong winds that occurred three weeks ago,” she said.

However, she said the victims need more support in terms of shelter since most of them were accommodated at relatives’ houses.

She therefore appealed to well-wishers to support affected households with shelter so that they come back to normal life.

MRF Administrator for Zomba District, Doreen Kaondo assured the minister her NGO would continue supporting people in the constituency when they are in need of assistance.

“We are very hopeful of our continued support towards people in the area because what we have done is just the beginning,” said Kaondo.

After witnessing the distribution of relief items to affected families, the Deputy Minister also visited some Community Based Child Centres where she donated fortified rice and soy blend to support learners in early childhood development centres.