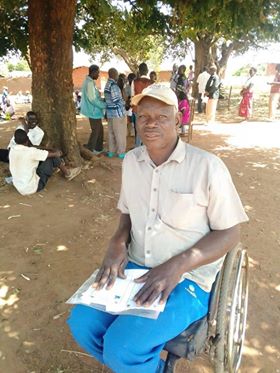 A person with a disability, Mr. Cosmas Sunduza of Katontha village in the area of Senior Chief Kayembe in Dowa district has commended Social Cash Transfer Program- Mtukula Pakhomo for changing lives of the vulnerable communities in the district.

Sunduza said Cash Transfer Programs have transformed lives of the poor as they are now able to buy some daily basic needs with what they are receiving as a supplement to what they have in the family.

He prayed for additional names to be included on the list of beneficiaries lamenting that others are just keeping receipts pending time to receive theirs and they do not know when.

Speaking in an interview after receiving his package at Chimbalu cluster centre, Sunduza lamented that the district has so many vulnerable people that are not receiving monthly packages and yet they are on pending without telling them when they will receive their money, a development which has reduced them to beggars.

He expressed fears that the development of taking a few to be paid for money while many are on pending has contributed to hunger saying the beneficiaries share what they receive so that their colleagues benefit as well.

“We share the money in the same way as FISP fertilizers, where each one get fertilizer in basins, thus sharing poverty,”he said.

Sunduza asked the authorities not to leave everyone behind in receiving Social Cash Transfer,- Mtukula pakhomo, so that all must benefit equally and together they can thank for its support in one song .

He expressed hope that government will listen to the outcries of the people in villages that selected individuals are receiving while many are finding the doors closed, making them think government has no welfare of its people.

Mr. Cosmas Sunduza,61, was born not with a disability, in 2011, he was involved in a road accident when the minibus he was travelling in from Dowa to Lilongwe had its front tyre burst and overturned at Chivala school, near Dowa turn off trading centre along the M1 Lilongwe- Mzuzu road.

Sunduza suffered a spinal cord injury and went to Kachere Rehabilitation, where he received his first wheel bicycle and then Bottom hospital for the second bicycle he is using at the moment.

He is a farmer not as he was before the accident in 2011, has a wife and 3 children, surviving on growing and selling tomatoes and the money receiving from Social Cash Transfer, assist him in paying casual wage laborers who does most of the work while his children are in school learning.