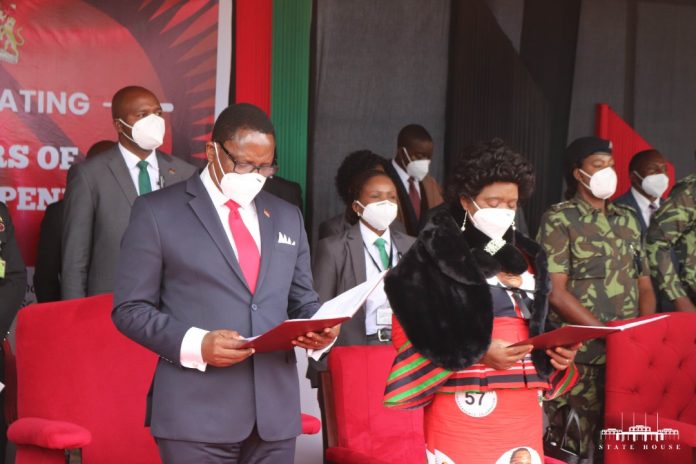 President Dr. Lazarus McCarthy Chakwera has declared two days of national mourning with respect to the 21 people who have died in a fatal accident involving two trucks and a coaster carrying 27 female passengers in Lizulu, Ntcheu district traveling to Chikwawa district .

Dr. Chakwera made the declaration in Lilongwe on his arrival from the United Kingdom [UK] where he attended a Global Education Summit alongside with other African Heads of State of Kenya, Sierra Leon, Nigeria, among other African countries.

He and all attending a press conference observed a minute of silence for those who have lost their lives in the tragic accident.

And in a statement signed by Mr. Zanga-Zanga Chikhosi, Secretary to the President and Cabinet, says President Dr. Chakwera is deeply saddened by the fatal road accident saying in view of this great loss to the nation, he has directed that there be a two-day period of national mourning from Monday 2nd to Tuesday 3rd August, 2021.

“During the national mourning period, all National Flags should fly at half-mast in honour of the lives lost,’’reads the statement in part.

The collision of vehicles happened between Mlanda and Lizulu on the M1 road near Bomba filling station in the early hours of Sunday, 1st August, 2021 at around 01;30 a.m, the coaster carrying 27 female passengers stuck underneath the truck.

In the accident, eight others, have sustained injuries and were rushed to Dedza District Hospital, one of the survivors, Getrude Zuze, said the truck which was over-speeding hit the coaster bus at its back.
Earlier in the day, Vice President of the Republic of Malawi, Rt. Hon. Dr. Saulosi Klaus Chilima writing on his official face book page, says he was saddened to hear of the tragic road accident that has killed 21 people with 8 others sustaining injuries and were taken to Dedza District Hospital.

“My heart is with the bereaved families for the loss of their loved ones, May the Souls of the Deceased Rest in Eternal Peace,’’says Dr. Chilima’s writing on the wall.

According to Ntcheu Police Station Publicist, Inspector Hastings Chigalu, Ntcheu has registered a total of 90 road accidents this year alone from January to June as compared to 44 during the same period last year.

Meanwhile, Government has directed that through the Department of Disaster Management Affairs [DoDMA] will provide transportation, coffins and monetary support towards the arrangements of the funerals and three lorries carrying seven coffins each are on the way from Dedza to Chikwawa for burial of the 21 people that have died in a fatal accident in Lizulu, Ntcheu.