by Hawa Juma
in Religion
Reading Time: 2 mins read
A A
0
0
SHARES
59
VIEWS
Share on FacebookShare on TwitterShare on Whatsapp

Madrassah Competetion Committee, has encouraged children and youths in the country to work hard in pursuing deen education.

The encouragement came through Yesterday when the committee conducted a Madrassah competition in Lilongwe where Students from different Madrassah’s in the District were competing in 3 categories namely, Quran recitation, Arabic and Seera.

In an interview With Radio Islam, a member of the committee, Fazira Kaunga, said they organized the competition to empower and encourage Children to work hard in Madrassah and to know their deen through the teachings of Islam.

“The committee will continue conducting more Madrassah competitions across the country so that they should reach out to more Muslim children, ” Said Kaunga.

One of the winners who took the first place in the Quran category, Lukayya Karim from Mchesi Madrassah, said she was happy that she won the competition.

She advised the ones who did not win the competition to go and work extra hard so that they should also win next time.

“I also advice children who do nit go to Madrassah to start going so that they should learn about deen “Said Karim. 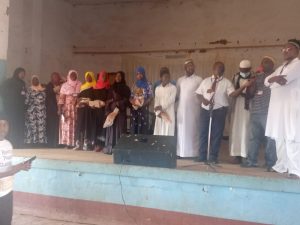 Commenting, one of the judges, Qassim Abdullah appreciated the way students from different Madrassah’s are performing.

He said there is still need for improvement and he asked ustadhs in Madrassah’s to make sure their students are improving by teaching them in a way they will understand.

One of the ustadhs from Falls Madrassah, Yahya Saeed, appreciated Madrassah competition committee for conducting the competition saying it has encouraged the ustadhs together with the students.

“We have learnt alot from each other’s Madrassah’s as we have known the things wehave not been doing right and we will make sure to improve, “Saeed Explained.