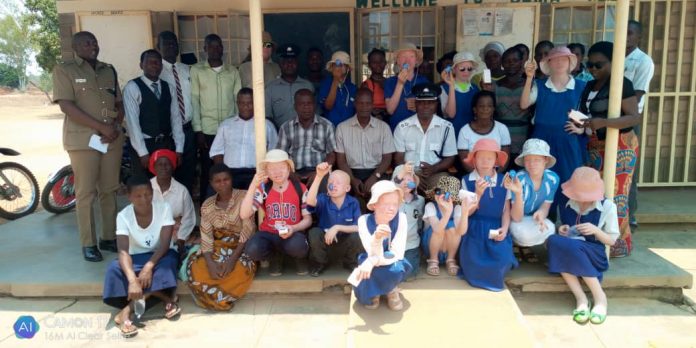 Nkhotakota police station has on Thursday distributed security electrical gadgets to people with albinism in the district.

“The exercise rolled-out today October 31, 2019 at Local Primary school in the area of senior chief Malengachanzi in the district where fourteen pupils were given the security electrical gadgets,” says Malimwe.

In his remarks, Khalira applauded the government for the provision of the security gadgets to ensure security to people with albinism.

He then promised people with albinism that police will keep on providing security to them.

“Police is doing its best to make sure that people with albinism in the district are free without any security interference,” Says Khalira.

He further advised the beneficiaries on the importance of using the security gadgets and how they can handle them during danger.

Khalira concluded by appealing to the general public to work hand in hand with the police if the malpractice of killing and abduction of albinos is to end.

He went on to thank Nkhotakota police for providing officers day and night to safeguard children with albinism at the school which is also a resource centre.

In his remarks, Mr Kalimanjira who represented Nkhotakota District Commissioner condemned the barbaric act of some evil people who kill people with albinism to sell their body parts.

Kalimanjira then asked police to put extra gear on awareness meetings to sensitise people on the effectiveness and use of the gadgets.